I’ve been playing around with a private network for a while, it’s fun but I haven’t been able to get past one somewhat critical issue: The vault that starts the network is unable to rejoin (without the -f flag) if it disconnects from the network.

It seems like despite having the same config, the remaining nodes refuse to allow connections from the origin node. Is there a max_children setting somewhere i haven’t seen or something else that is causing lost connections?

Additional info:
If I disconnect another of the secondary nodes and attempt to reconnect, it also is unable to rejoin. So basically if my first node ever disconnects, the rest of the network is doomed.

I came across the same problem. As if the other nodes remember the IP address of the genesis node and later don’t accept a regular node at that address.

Edit: I just saw your second post. So this problem seems to be worse than I thought. I will try to reproduce it.

Can you maybe share your crust config file please? Just want to see if you have any explicit hard_coded_contacts listed. There could be two things at play here.

You certainly dont want to restart the first node with the -f flag ofc, that’d just create a new network and not really “join the existing one”.

so if you have the routing config file overriden with min_sec_size:5, then maybe start 6 nodes normally then kill the first node and then restart it as a normal node. now provided you have the hard_coded_contact info of the other nodes setup for this restarting node, that should allow this restarting(which really isnt a restart, the network would see it just as any other new node but at this point allow it to bootstrap via non first node as well) node to join.

Good input.
@tfa That sounds like what’s happening, I was imagining it was something like that.
@Viv

Regarding ports, since I can’t find any docs that explain it, could somebody clarify these for me?:
tcp_acceptor_port: (for accepting incoming connections, or something like that?)
service_discovery_port: (for discovering/connecting to the vault service?)
I’m sort of guessing on that, I set the tcp_acceptor_port to the same thing I have in the bootstrap settings though it didn’t seem necessary. In the end I did get things working, I’d like to understand a bit more though.

You get a gold star today! 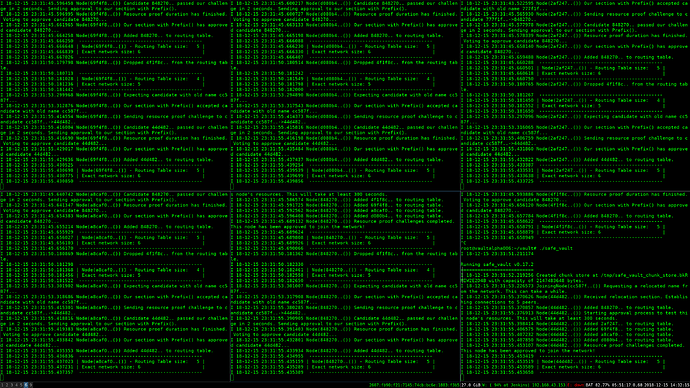 I’ll have to set up a couple more redundant nodes (and test to see if there were issues with the browser not responding when you have more than min_sec_size nodes up/add issue I saw a while ago) but…it works. Started one node with -f, launched the other 5, killed the first and restarted without -f, was able to cycles through the network killing one node at a time without problems. Until I killed 2 nodes and ran into the same issue because I dropped below min_sec_size, oops (and I did it all over again)

Looks like I’m in business though, appreciate the help!

I’ll do some more testing, I’m thinking I’ll run about 10 nodes (that should create 2 sections if my min size is 5 right…?) and should be able to kill several at a time without problems. Maybe I’ll even write my own chaosmonkey type script…

that should create 2 sections if my min size is 5 right…?

It’s not so simple. There is a reserve factor to avoid a merge if a node leaves one the 2 sections just after the split because this section would be below the 5 nodes limit. If I remember correctly this factor is 3 nodes, which means that the 2 new sections must have at least 5 + 3 = 8 nodes to allow the split.

This makes a minimum of 16 nodes to trigger the split. This is a minimum because if the two halves of the section about to split are not balanced, then more nodes are needed so that the smaller section reaches 8 nodes.

So you need to create temporarily at least 16 nodes to trigger the split. After that you can delete some nodes to have 2 sections with 5 nodes each.

This topic was automatically closed after 60 days. New replies are no longer allowed.