I stumbled on a couple of neat looking React libraries for data presentation among other things. The github page has animated demos, so worth a visit:

I’ve been playing with React-static and am liking it a lot. Still not tried Gatsby.js! Introducing Ionic 4: Ionic for Everyone

Today I am thrilled to announce the 4.0 release of Ionic Framework, lovingly known as "Ionic for Everyone." 🎉 Ionic 4 represents the culmination of more than two years of research and hard work transforming Ionic from "mobile for Angular" into a...

I’m learning a lot from Tanner (and I have a lot to learn about front end development) and here’s something else that he shared: CodeSandbox. This blew me away, here’s a link he shared so people can play with the update to React-table that he’s working on: 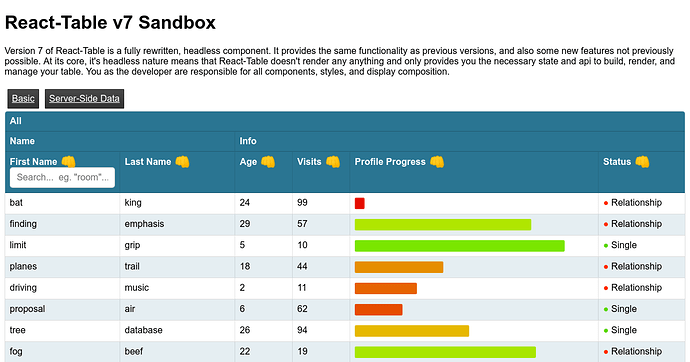 Is the benefit just that Ionic 4 lets you publish existing websites as mobile apps and run them in a webview, sort of like Cordova but better? Maybe I’m missing the point

Hey @happybeing thanks for sharing with us. No I haven’t used Ionic before, but now as web component they sounds interesting for me.

@cooperka I’ve only read the linked blog announcement, which is useful because it gives the history and then explains what is such a big deal with Ionic 4. What I understand is that you can use Ionic components, including any customisations and derived components of your own, in any popular framework, so Angular, Vue, React etc, and that they put a lot of effort into making them fast, compact, slick etc.

With the rapid turnover of frameworks, and easier handling of different platforms, it sounds a good way to reduce effort and keep apps fresh. Anyway, Tanner was enthusiastic, which I take as

use Ionic components, including any customisations and derived components of your own, in any popular framework

I see, that sounds useful indeed. I suppose you could do something similar with React and e.g. use those components inside of a primarily Angular app, but it may not be as smooth of an integration. I want to play around with this, thanks for the links!

For wordpress, there are a few options. Free-est seems to be: https://wordpress.org/plugins/simply-static/

I think speed will be an important factor for making effective Web apps and websites on SAFE Network.

Most websites so far built on SAFE tend to be sluggish when you click on a link etc, but it doesn’t have to be this way.

The following shows that we can have blazing fast websites on SAFE Network by using the same tech designed to create the fastest sites on the Web.

React-static does this not just by creating a static website, but by making each page compact and bundled, along with built in preloading of linked pages just in time for the visitor to click on them (e.g. on page load, or when a link scrolls into view etc).

The following demo shows the same React-static website on both Web and SAFE, and can be used by anyone as a starting point for testing this out or developing their own super fast website, with all the power of React.

After adding new content or editing a page you can build your website and automatically upload it to Web and/or SAFE Network with one command.

A React Static website that deploys automatically to web and SAFE! General

Create your content locally in markdown and then publish to web and/or SAFE Network. Here is the demo Blog live: Web: rsdemo.markhughes.com DWeb: safe://rsdemo Clone this repo to create a Blog website/app for Web and/or SAFE Network that will load blazing fast because it is based on React-static. Deployment On Linux this is automatic using a bash script with FTP (with ncftpput) and/or SAFE Drive: $ scripts/deploy.sh yarn run v1.12.3 $ react-static build => Info: No 'siteRoot' is define…

TLDR; Tanner Linsley is moving on, looking for other to maintain RS.

Call For Maintainers and Project Ownership Summary As of today, both Nozzle and I (Tanner Linsley) will no longer be contributing to the...

RS is a very nice option so I hope it continues to be developed.

EDIT: React Static has a new sponsor and maintainers so all is good

Currently doing a maintenance release and accepting proposals to work on post-summer!

The following is a site built with React-static

Check out the most popular open-source projects and the latest trends about the web platform and Node.js.

I struggle to see the difference between sites buit in React and those created with React Static to be honest. I don’t think they explain this very well. Or perhaps they assume a level of understanding that I don’t have.

The difference is speed.

React-static generates the pages in advance, and will prefetch pages and resources that might be loaded next so you don’t have to wait for them to load when you click, or scroll etc.

I’m sure there are other techniques but I think that is the gist of it.

So if you click on a link in DWeb Blog, web or safe versions, the page loads instantly. A React site would only request the page after you click, which causes a delay which can end up being not just noticeable but a poor UX.

As I understood it React does that anyway, since a website is essentially one app so everything is ready to go. Certainly the Primer 2 site is pretty whizzy, but maybe there’s a noticable difference when you’re talking about larger sites or sites with lots of links. It would be interesting to see a side by side comparison.

I was going to learn React Static but found the concepts a bit alien, so thought it would be best to learn some React first. Maybe I’ll give it another try when I have some time (haha).

You could be right and I may not have understood. I haven’t learned either, so may be wrong but my impression is that there’s not that much difference in learning one or the other. I think that the same concepts, components etc apply to both (so I went to the React docs to understand how I might customise React-static), but React-static generates faster code by automating things that would take more work to achieve in React, and I would guess comes with some restrictions. But that is mostly guesswork.

Best to ask the React community, and Tanner in particular for a definitive answer.

React vs React-Static: What are the differences?

What is React? A JavaScript library for building user interfaces . Lots of people use React as the V in MVC. Since React makes no assumptions about the rest of your technology stack, it’s easy to try it out on a small feature in an existing project.

What is React-Static? A progressive static-site framework for React . React-Static is a next-gen static site generator for React. Finally, you can build a website like you do any other React App. There’s no special CMS, query language, or crazy lifecycle hooks. Just good old React producing an amazing SEO-ready, user experience driven, progressively enhanced website. The effort is minimal, but the benefits are not!.

React belongs to “Javascript UI Libraries” category of the tech stack, while React-Static can be primarily classified under “Static Site Generators” .
Ref

And this intro from Tanner was one of the first things I read and very helpful. It includes:

A progressive static-site framework for React, designed to deliver an amazing experience for your users and developers alike, without compromising React in any way. It’s insanely fast, SEO-ready, and is the most React-friendly static-site library on the planet.

How is it different?

Contrary to most other static site generator for react, React-Static is very direct with how data flows from its source to a route. Not only does this provide a convenient abstraction point for managing all of your static data, but by keeping the data pipelining and react templating as separate as possible, your site can be built as a “function of state” with only a single pass of SSR!

so thought it would be best to learn some React first

This is not a bad idea!

On top of the resource given by @happybeing, (by Tanner), there are a few other considerations:

This is a great topic, thanks for all

This is very good - learn React in ten tweets: 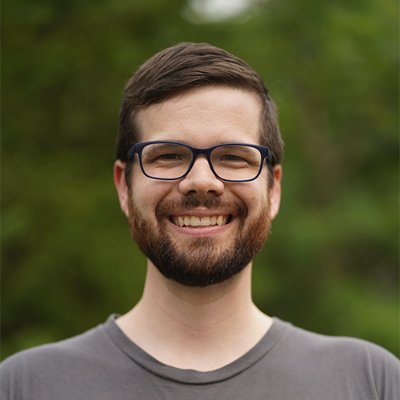 Aaaand this is very good too - sveltejs in ten tweets:

It’s written in Svelte but at first sight is not just for building with Svelte - it’s more a website builder that lets you build slick sites fast, and deploy them anywhere as static HTML, but which also gives developers access to code.

When the code is released you will be able to host the CMS locally or on your own public server, so it could be a very nice way to build SAFE websites.