Have got the latest SAFE browser working. Then tried the web hosting example on it. All things worked until I revoked the access in the browser, and clicked the Deny button when the example app asking for permissions. Now the web hosting app just keeps spitting the Failed to Connect error, no matter if I start it with the dev mode or packaged one.

I guess maybe it’ll help if I clean the cache/stored data for the example app. It says somewhere on app’s boot screen that there’s a File -> Clear menu item, which never appears on the Mac version.

Anyone can shed some light on this issue? Thanks!

As mentioned in the dev update, we are in the middle of minor refactoring. The nodejs api was updated and the examples are being updated one after the other.

Just merged a PR for the web hosting manager. I hope fetching the latest code should resolve your issue. Thanks for trying it out @maxweng

I can build this OK.
When I run the Browser and log on, I am asked to authorise the web hosting manager - All good so far - then the Initialising application screen comes up and hangs at … 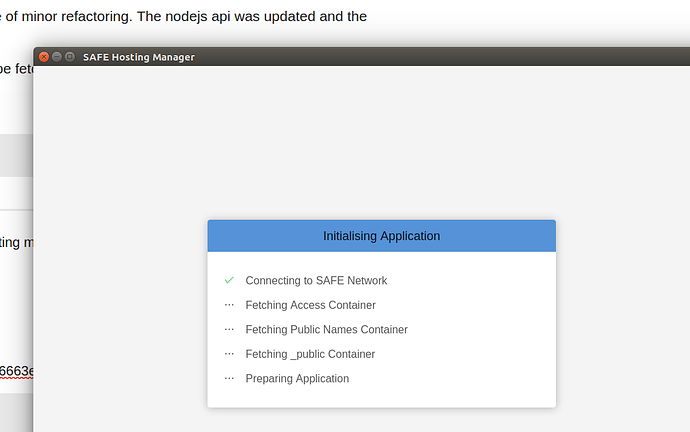 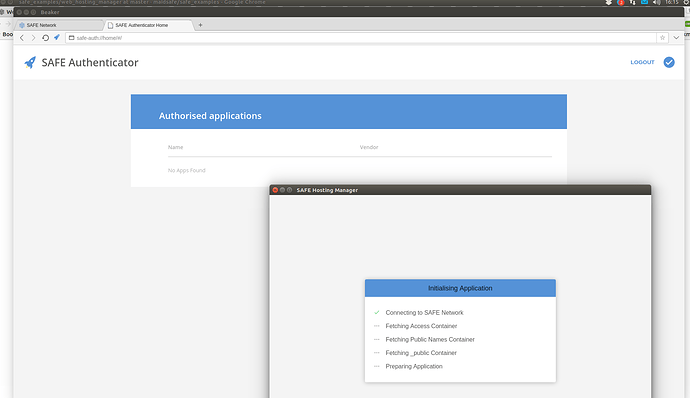 Note the application has started but the list of authorised applications is EMPTY!!!

Thanks for getting back. I’m on the dev branch of the web hosting app, and the latest commit I saw is 2630f84. I’ll have to wait for the dust to settle down a bit for now, I guess.

I was able to get thru all this, and create a public id and web services etc, until I was poking around and hit the deny permission button in the auth pop-up. I’ve also seen a bunch of minor issues, but I guess that the maidsafe is still working on migrating the example apps.

I guess I’ll just go ahead to the github and file the issues I ran into. Hope that’ll help with your later tests on the example apps.